Globs of an inflammation protein beckon an Alzheimer’s protein and cause it to accumulate in the brain, a study in mice finds. The results, described in the Dec. 21/28 Nature, add new details to the relationship between brain inflammation and Alzheimer’s disease.

Researchers suspect that this inflammatory cycle is an early step in the disease, which raises the prospect of being able to prevent the buildup of amyloid-beta, the sticky protein found in brains of people with Alzheimer’s disease.

"Finding an inflammatory protein that can prompt A-beta to clump around it is  'a big deal',” says immunologist Marco Colonna of Washington University School of Medicine in St. Louis.

Researchers led by Michael Heneka of the University of Bonn in Germany started by studying specks made of a protein called ASC that’s produced as part of the inflammatory response. (A-beta itself is known to kick-start this inflammatory process.) Despite being called specks, these are large globs of protein that are created by and then ejected from brain immune cells called microglia when inflammation sets in. A-beta then accumulates around these ejected ASC specks in the space between cells, Haneke and colleagues now propose.

The details show “a quite new and specific mechanism” that’s worth exploring for potential treatments, says Richard Ransohoff, a neuroinflammation biologist at Third Rock Ventures, a venture capital firm in Boston.

To be effective as a treatment, an antibody like the one in the study that kept A-beta from sticking to ASC would need to be able to enter the brain and persist at high levels — a big challenge, Ransohoff says. Still, the results are promising, he says. “I like the data. I like the line of experimentation.”

For more information go to www.sciencenews.org/article/specks-brain-alzheimers-plaque-forming-protein. 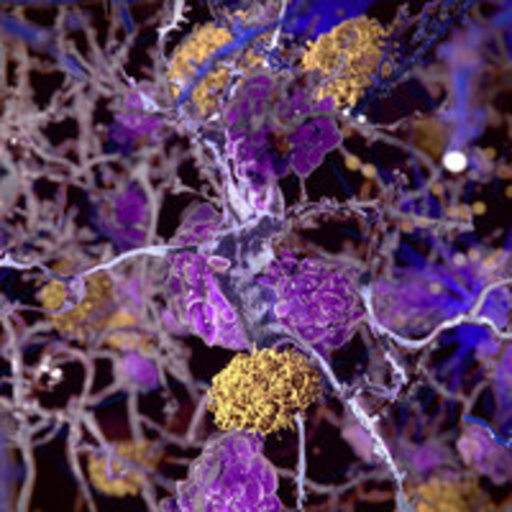