The FDA approved a new drug to treat Alzheimer’s disease in June of 2021,the first in 18 years! Aducanumab works by reducing the Alzheimer’s marker amyloid in the brain, a therapy expected to slow cognitive decline in those living with early Alzheimer’s.

2021 also saw human trials begin for a vaccine designed to slow the progression of Alzheimer's. To learn more about the exciting new Alzheimer’s research, view this video from the 2021 Alzheimer’s Tennessee Research and Management Symposium.

New drugs and treatments can't become available without volunteers to take part in clinical trials. Click here to learn more about upcoming and ongoing trials in Tennessee and across the country. 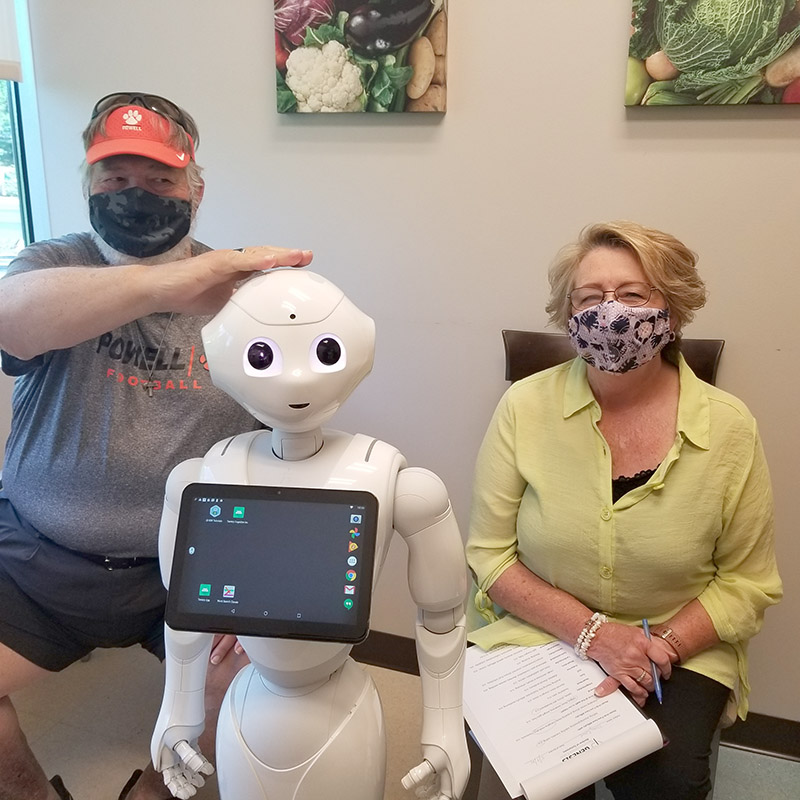 Alzheimer’s Tennessee continues to support research to improve quality of life for those living with Alzheimer’s disease. A team of engineers at the University of Tennessee is working on computer and robotic systems to help with activities of daily life and foster independence for seniors experiencing cognitive decline.

While Alzheimer’s disease (AD) currently has no known cure, the results of recent research are raising hopes that someday it might be possible to delay the onset of AD, slow its progress, or even prevent it altogether. Delaying by even 5 years the time when AD symptoms begin could greatly reduce the number of people who have this devastating disease.

We do not yet fully understand what causes AD, but we believe it develops because of a complex series of events that take place in the brain over a long period of time. Many studies are exploring the factors involved in the cause and development of AD including the following:

Genetics:
Slow and careful detective work by scientists has paid off in discoveries of genetic links to the two main types of AD. One type is the rare, early-onset Alzheimer’s disease. It usually affects people aged 30 to 60. Some cases of early-onset disease are inherited and are called familial AD (FAD). The other is late-onset Alzheimer’s disease. It is by far the more common form and occurs in those 60 and older.

Beta-Amyloid: fragments of this protein stick together and then gradually form into plaques

Meanwhile other scientists are studying health, lifestyle, and environmental factors-such as exercise and diet or the control of chronic diseases like diabetes-that may play a role in preventing or slowing AD or cognitive decline. Recent research suggests that maintaining good overall health habits may help lower our chances of developing several serious diseases, including brain diseases such as AD. This area is of particular interest because it appears that there may be things that individuals can do themselves to hold off AD.

Several of these potential factors have been identified in animal studies and in epidemiologic studies (studies that compare the lifestyles, behaviors, and characteristics of groups of people). At present, these factors are only associated with changes in AD risk. Further research, especially clinical trials, will be needed to determine cause-and-effect-whether these factors really do help prevent cognitive decline or AD directly.

More and more, scientists are turning their attention to how they can treat, slow, or perhaps prevent Alzheimer’s at various points during the lengthy disease progression-beginning even before symptoms are evident.

It has become clear that there probably is no single “magic bullet” that will, by itself, prevent or cure Alzheimer’s disease (AD).

For people who already have AD, the most immediate need is for treatments to control cognitive loss as well as problem behaviors, such as aggression, agitation, wandering, depression, sleep disturbances, hallucinations, and delusions.

Scientists also are investigating treatments that combine medications with lifestyle strategies to lessen the risk of developing cognitive decline or AD.

Eventually, scientists hope to develop treatments that attack the earliest manifestations and underlying causes of AD, thereby slowing, delaying, or preventing the disease from progressing and damaging cognitive function and quality of life.

Several prescription drugs are currently approved by the U.S. Food and Drug Administration (FDA) to treat people who have been diagnosed with Alzheimer’s disease.

AD research has developed to a point where scientists can look beyond treating symptoms to think about delaying or preventing AD by addressing the underlying disease process. Scientists are looking at many possible interventions, such as treatments for heart disease and type 2 diabetes, immunization therapy, cognitive training, changes in diet, and physical activity

NIA, part of the National Institutes of Health, is the lead Federal agency for AD research. NIA-supported scientists are testing a number of drugs and other interventions to see if they prevent AD, slow the disease, or help reduce symptoms.

Scientists are very interested in the toxic effects of beta-amyloid-a part of amyloid precursor protein found in deposits (plaques) in the brains of people with AD. Studies have moved forward to the point that researchers are carrying out preliminary tests in humans of potential therapies aimed at removing beta-amyloid, halting its formation, or breaking down early forms before they can become harmful. For example, in a clinical trial sponsored by NIA, scientists are testing whether “passive” immunization with an FDA-approved drug called IGIV can successfully treat people with Alzheimer’s.

Some age-related changes may make AD damage in the brain worse. Researchers think that inflammation may play a role in AD. Studies have suggested that common nonsteroidal anti-inflammatory drugs (NSAIDs) might help slow the progression of AD, but clinical trials so far have not shown a benefit from these drugs. Researchers are continuing to look at how other NSAIDs might affect the development or progression of AD.

Scientists are also looking at free radicals, which are oxygen or nitrogen molecules that combine easily with other molecules. The production of free radicals can damage nerve cells. The discovery that beta-amyloid generates free radicals in some AD plaques is a potentially significant finding in the quest to understand AD better.

Research has begun to tease out relationships between AD and vascular diseases, which affect the body’s blood vessels. Some scientists have found that some chronic conditions that affect the vascular system, such as heart disease and diabetes, have been tied to declines in cognitive function or increased AD risk. Several clinical trials are studying whether treatments for these diseases can improve memory and thinking skills in people with AD or mild cognitive impairment.

A number of studies suggest that factors such as a healthy diet, exercise, and social engagement may be related to the risk of cognitive decline and AD. For example, emerging evidence suggests that physical activity might be good for our brains as well as our hearts and waistlines. Some studies in older people have shown that higher levels of physical activity or exercise are associated with a reduced risk of AD. Clinical trials are underway to study the relationship of exercise to healthy brain aging and the development of AD.

Scientists have also studied whether diet may help preserve cognitive function or reduce AD risk. Some studies have found that a “Mediterranean diet” was associated with a reduced risk of AD. To confirm the results, scientists are conducting clinical trials to examine the relationship between specific dietary components and cognitive function and AD.

Studies are looking into many other possible treatments, including hormones and cognitive training, to see if they might improve thinking skills in people with AD or even prevent AD in people who are at risk.

Ongoing research is helping us learn more about ways to maintain a healthy brain and about the risk factors for Alzheimer’s disease (AD) and other kinds of dementia. Alzheimer’s develops over many years and appears to be affected by a number of factors that may increase or decrease a person’s chances of developing the disease. While age and family history are risk factors, other things such as diet, exercise, and lifestyle are believed to have an influence as well. We can’t control some of these risk factors, but we can control others.

Contact Us For More Info
Email This to a Friend